Do Hammer Fists Or Elbows To The Leg Work? 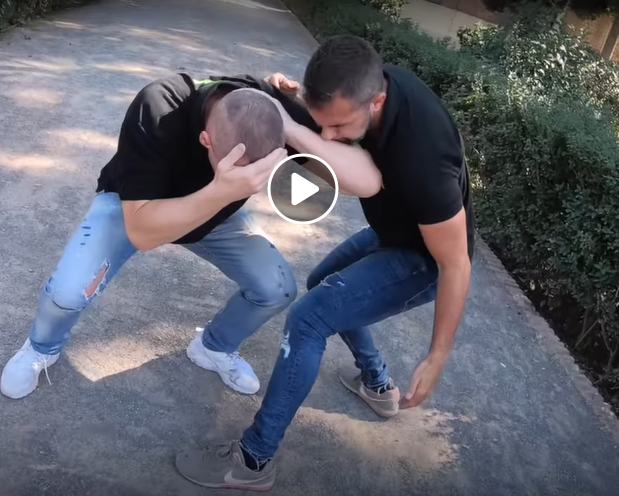 A question has been arising lately online as to the usefulness of hammer fists to the leg.

And in today’s article, we discuss why they are taught and indeed if they work.

Hammer Fists To The Leg

For years as a police officer, I was taught to knee strike the side of a persons thigh.

We used to train this on pads, and of course, you could feel it through the pad and knew that it would work.

I saw many officers use this technique, but I never once saw it have any visible effect.

Yes, a full power knee strike to the thigh did nothing.

So, with this in mind, why would it be useful to hammer fist a thigh?

Well, the answer lies in what happened after the knee strikes landed.

The suspect moved their leg.

This movement might not be significant if viewed in isolation, but it was because they then went into a squared position with their legs, and once this happened they were taken to the floor and handcuffs applied.

The balded stance or boxer stance is a term used to describe when a person is standing with one foot forward and the other behind, just like a boxer.

As this stance is something, we tend to get into naturally when we are about to fight.

Part of the reason for this is that the bladed stance shows less of our body on target and also we are more on balance.

So, when you are fighting a person in the bladed stance, one of the most effective things you can do is to ‘square their stance’.

This is something that Judo players do all the time to throw people; they square the opponent up.

In a 360-degree combat situation, you will soon see why DL trains the way that it does.

Because you are vulnerable to attack from all angles, you need to be covered up and also move rapidly.

And so, you can’t fight like a boxer, kickboxer or MMA fighter would.

This is one of the reasons Defence Lab drop down to elbow or hammer fist the leg and then attack with an ascending elbow strike.

Firstly the low line strike will probably cause the attacker to square up they stance, even just slightly, and get them to look down as you lower your body.

From there they are in prime position to receive a powerful elbow strike to the face, and as they are likely to be in a square stance, they will be rocked backwards.

But What If The Leg Doesn’t Move?

There is always a good chance that the leg doesn’t go back and they don’t square their stance.

That is fine because we are in the business of creating openings for attack from our defensive position.

You need to understand, you are in a street fight, with 3 or 4 people wanting to rip your head off.

You are going to be on the receiving end of kicks and punches from all angles; you are probably going to be dragged to the floor.

And yes….people die in these situations all the time.

So you have to do something.

So, by striking low, you create small differences in their body structure as a result.

And when they move, you have a chance.

It is easy to say ‘that won’t work when you see a video online.

But you have to see the unseen.

These all play a part in fighting but much more than this, if you find yourself against a group attack, then you will need to try and do something.

Because you will soon find that your traditional 1 v 1 techniques are practically useless and nullified.